After  a visit to Easton Walled Gardens, I return to my own little patch, and feel like anything is possible- I can take on any challenge.

Easton’s  Ursula Cholmeley has approached her major restoration project with so much courage and determination, spending a few hours in her company is all that’s needed to boost my enthusiasm.

Easton was lost under tree saplings and brambles until Ursula started work on the garden 16 years ago. The decline started when Easton Hall, the mansion house that used to stand on the site, was requisitioned at the start of the Second World War. The soldiers stationed there caused so much damage that restoration was not a viable option. There was talk of gunfire being heard in the house and grenades thrown into the greenhouses.

As a result, the house was literally bulldozed down in 1951, and some of the stonework and debris has been left along one bank to show what conditions were like when Ursula took on the garden. Poignantly, only the gatehouse remains- and that only survived because the bulldozer broke down. It’s a tantalising glimpse of what glories have been lost. Photographs of the old house show magnificent tall glass windows and an orangery overlooking the terraces.

If you visit Easton, you can walk up the flight of stone steps and stand on the spot where there is just the ruins of a bay window left. Standing there, you can survey the scene, and imagine what it would have been like to live there.

Now, thanks to Ursula’s vision and hard work,  you can see a reconstruction of the gardens. Looking out from the terrace, you see the walled gardens in the distance with fruit trees and roses planted through a meadow. Mown paths represent the original paving.

The terraced banks are full of wild flowers. They are yellow with cowslips today, and we think we spotted orchids.  We stood and watched the swallows, seemingly flying just a few inches above the terraces. Such a sight- and sound. That twittering noise has followed me home! 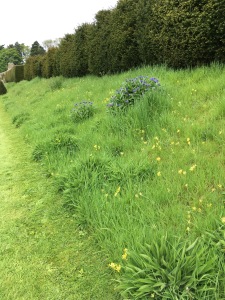 A patch of blue Centaurea Montana shines out amongst the yellow cowslips. 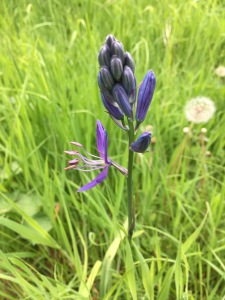 Camassia bulbs are planted in the Cedar Meadow- taking over from the tulip and narcissi display. 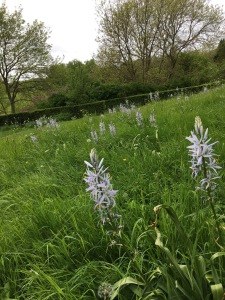 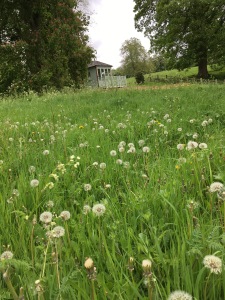 Maybe I won’t pull up all those dandelions and cow parsley in my garden, after all. A lovely setting for the Meadow Retreat summerhouse. 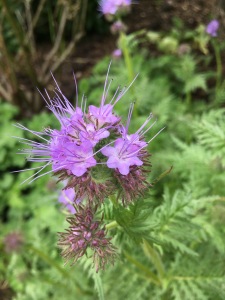 Phacelia tanacetifolia. Loved by bees. I’ve grown this as a green manure crop, and forgotten to turn it over in time. Such a happy accident.
Records show  there has been a house here since 1592. What changes the gardeners must have seen over the past 400 years.

Easton Walled Gardens  is just off the A1 near Grantham in Lincolnshire. Open from 2nd March to 30 October, and also for snowdrops. See the website for opening times and special events http://www.visiteaston.co.uk. Follow on Twitter @EWGardens and on Facebook.

Are there any gardens that you visit for inspiration?

9 thoughts on “A Visit to Easton Walled Gardens”