The first frost sees me running up the garden, collecting dahlia flowers in buckets. Even slightly faded, tatty flowers are harvested. Every bloom has suddenly become precious. It will be a whole nine months before we have any more of these glories. 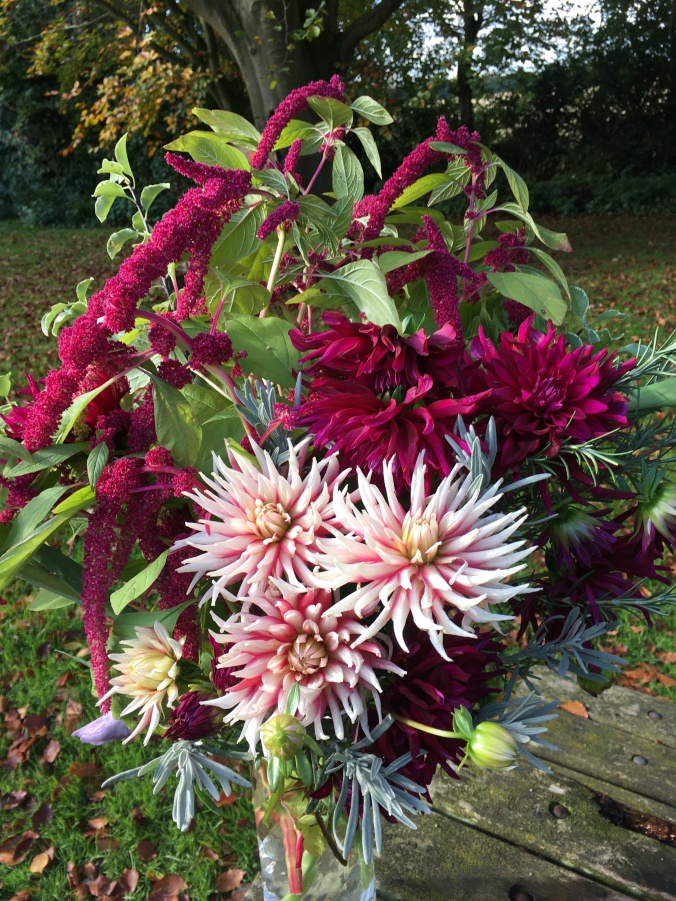 In amongst the dark blood red dahlias are these interlopers. I didn’t plant them. I’ve been growing cactus dahlia Nuit d’Ete for around 20 years. Alongside, there’s some white dahlias called My Love. Could they have crossed to produce this striped flower? It’s a mystery. A very pretty interloper, even so. It can stay. 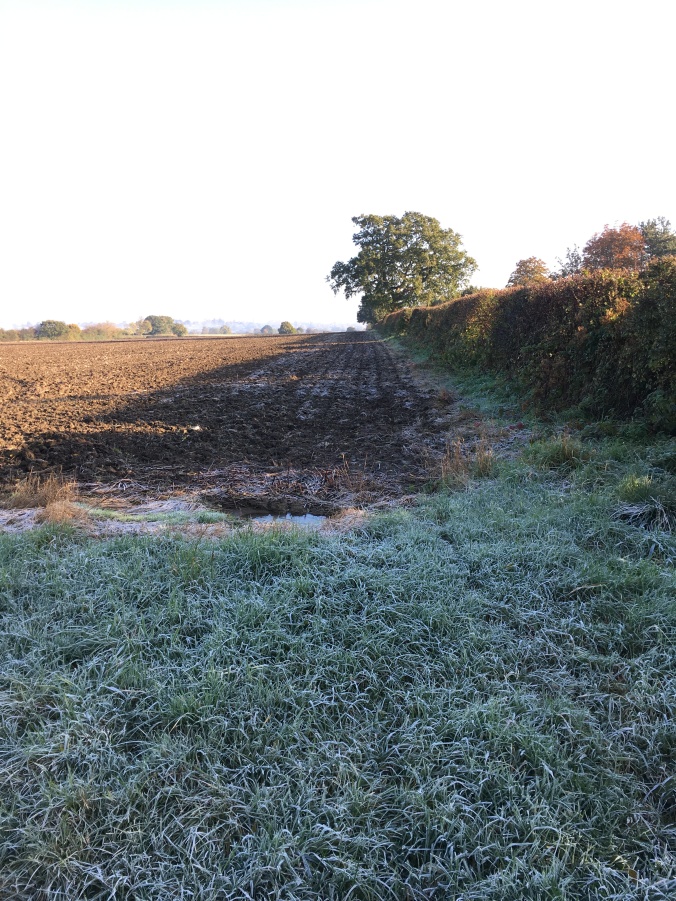 Frost means the end of tender flowers such as dahlias. Plants will collapse virtually overnight. Last year I left the tubers in the ground and covered them with a foot of dried leaves and a cloche. The secret is to keep them relatively dry. However, this year I will lift them all. The ground is sodden. We’ve had 266mm of rain over the past two months, double the usual amount. Five months worth of rain in the past five weeks. There’s no way I’m going to be able to keep the dahlias from rotting, unless I lift them. 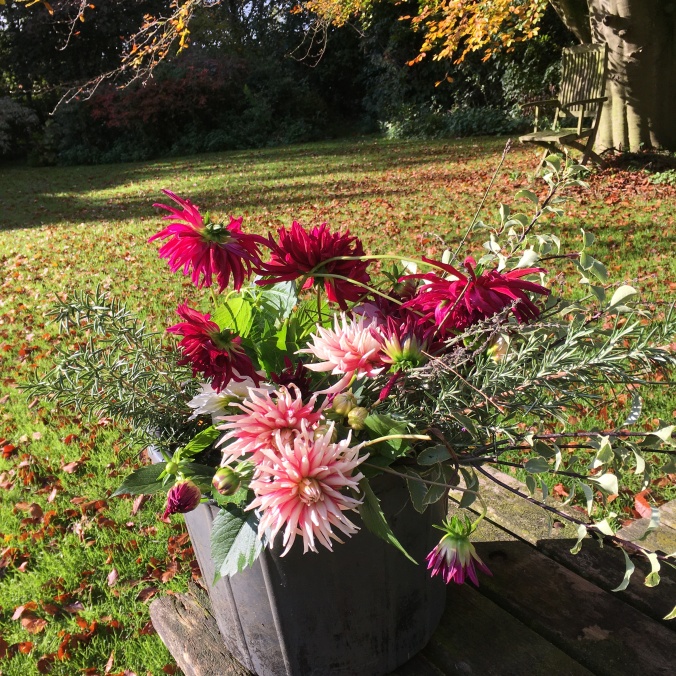 So, using very sharp florists’ scissors, I collect buckets of flowers for the house, before tackling the tubers. Tubers are carefully lifted to avoid bruising. They are cut off leaving 3″ of stem. Turned upside down to drain. Then put in a dark, cool, frost free shed. After a week or two, I’ll wrap them in newspaper, or put them into pots of dry compost to overwinter. They will be started back into growth in the greenhouse in February, cuttings will be taken, and the whole cycle of planting and harvesting will go round again. 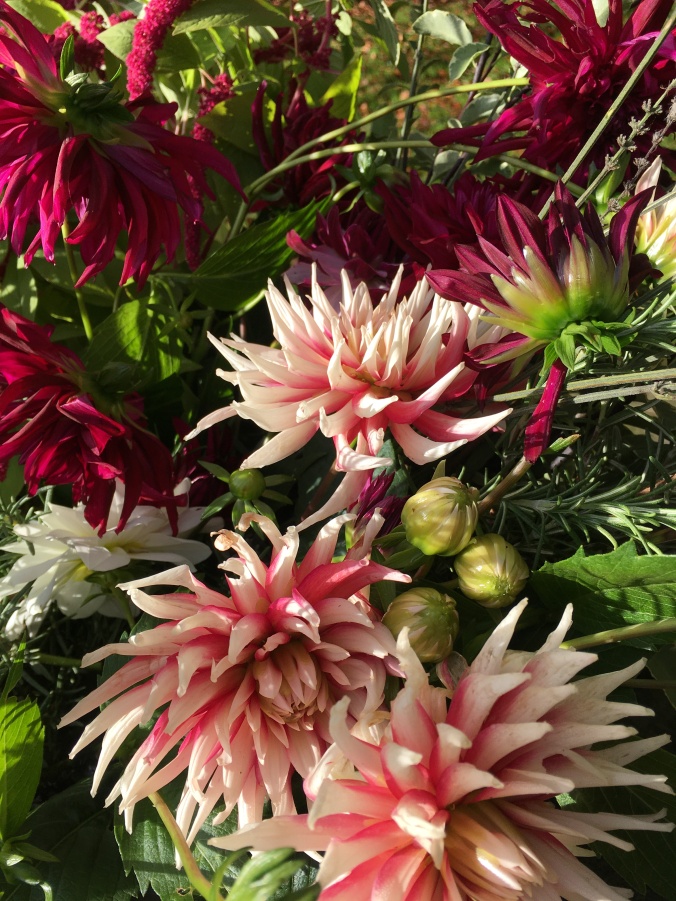 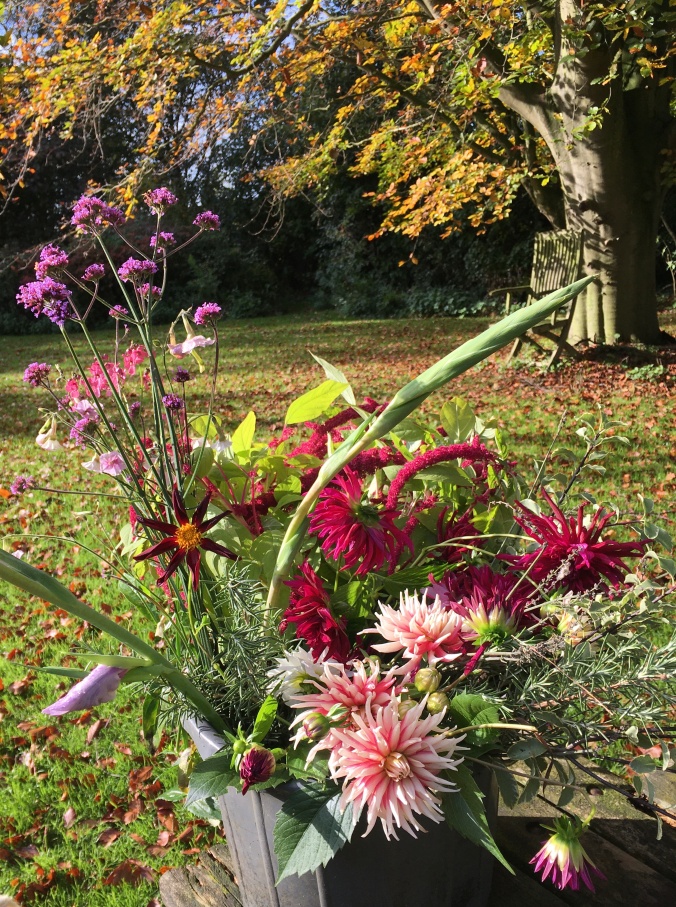 I also picked some verbena bonariensis, diascia, the last of the Nicotiana Mutabilis, some very late gladioli, and herbs such as rosemary and lavender. 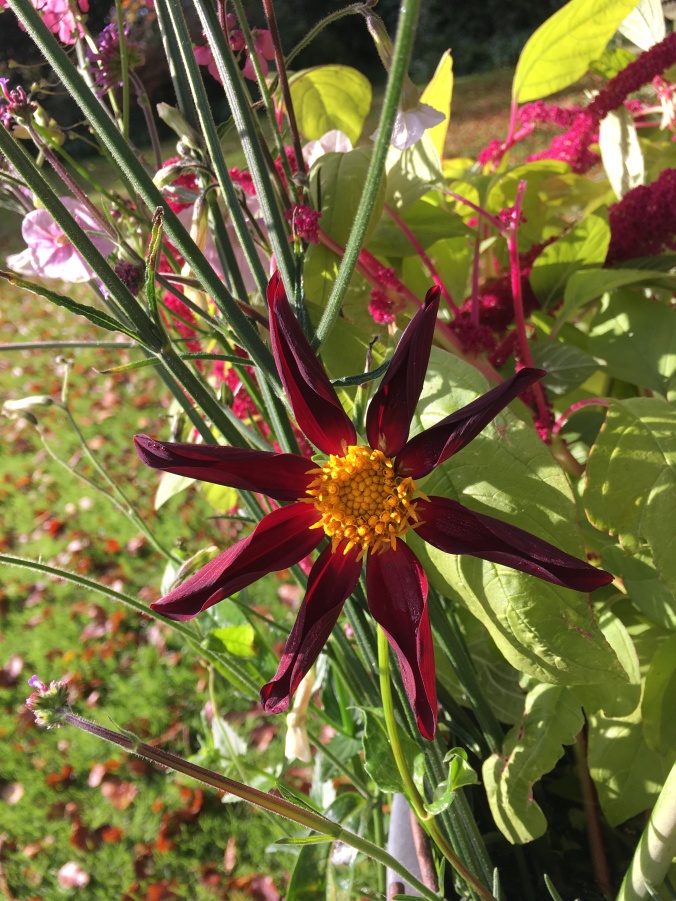 There is one last flower from Dahlia Obsidian, a tuber I bought from East Ruston Garden in Norfolk a few years ago. I like to buy a few plants when I’m on holiday to remind me of the visit. This one is particularly good for pollinators, being an open, single flower. 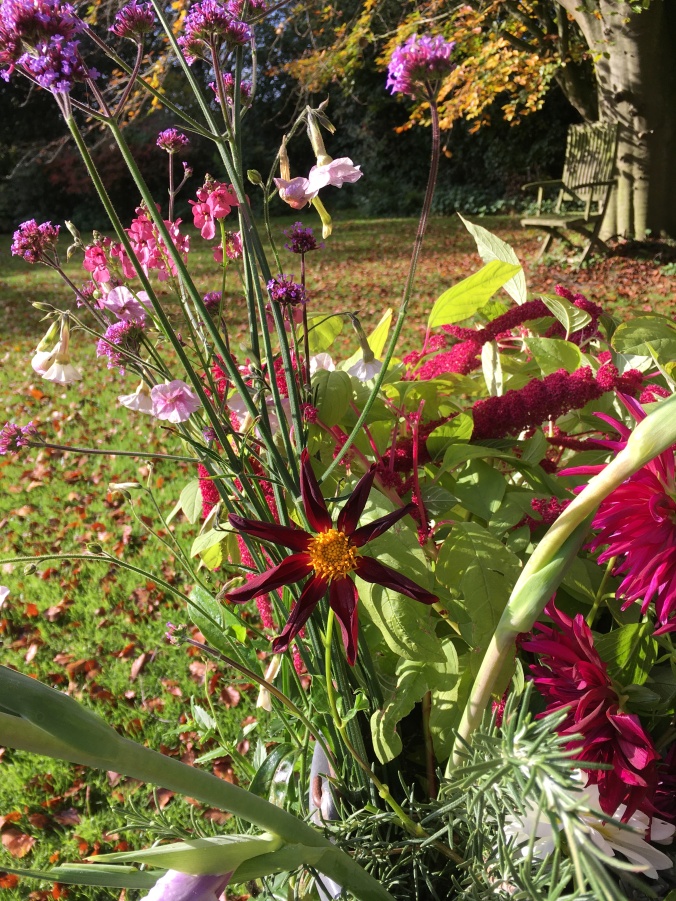 Added some Amaranthus, love lies bleeding. I have grown the red and the white form this year. 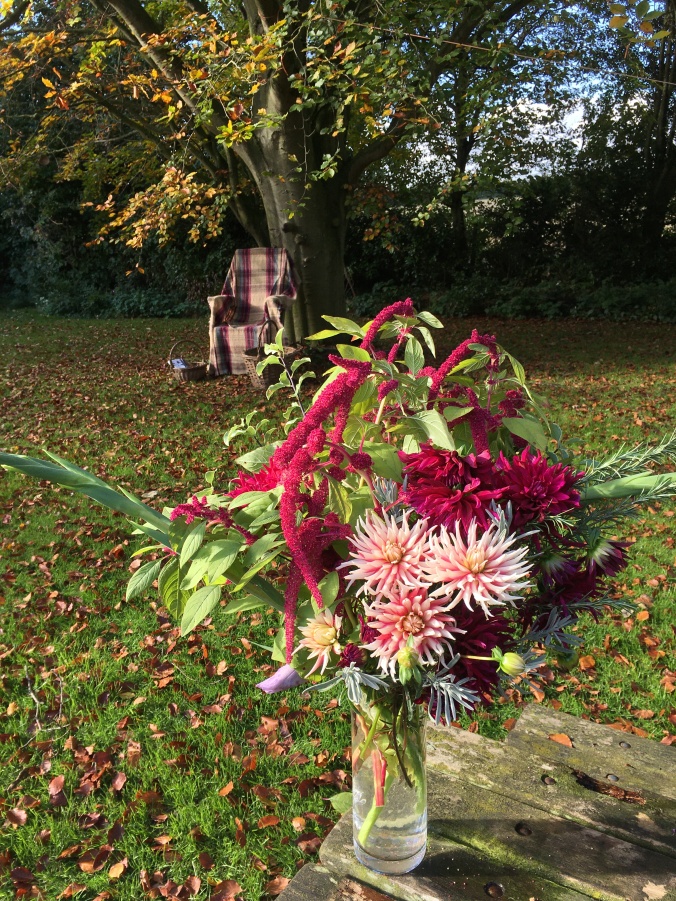 And this is what the flowers look like, all put together. I had enough flowers for four or five vases. 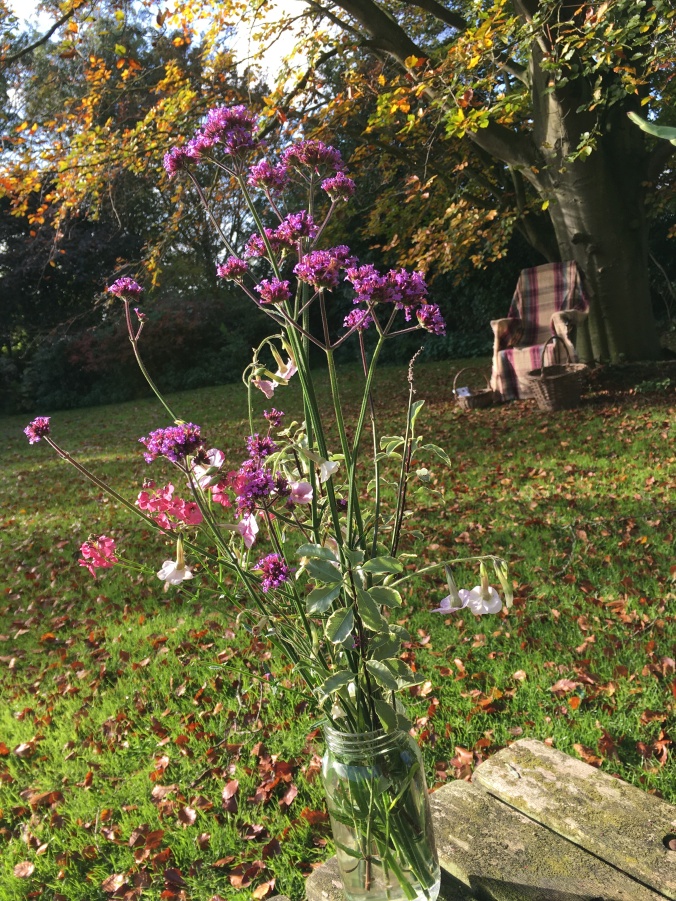 I put the verbena mixture in a Kilner jar that used to belong to my great aunt Betty. She was a keen cook and preserved everything in those jars. She gave me about 100 when I first set up home. Happy memories; I use them every day and think of her.

It’s warm and sunny enough to sit in the garden today. After all that rain, I’m not spending a second shut indoors! I’ve even written this sitting outside on an old garden chair covered with a cosy woollen blanket. My feet are getting cold, so I’ve put a few bricks under them as a makeshift foot stool. No doubt there will be more frost ahead, but I’m determined to get outdoors as much as I can this winter and not get stuck by the fire.

Have you had a frost in your area yet? Are you leaving your dahlias in the ground or lifting them, like me? Let me know how things are growing in your part of the world.

Thank you for reading, and for getting in touch.