I’m catching up here. This is in fact last week’s IAVOM. Internet and computer problems defeated me. We are on the old copper wire telephone line, and not the new super duper cable -type. It’s too expensive for BT to extend the cable down our lane, so we are stuck with speeds that are too slow to upload photos or do internet banking. Anyway, the internet may have set me back, but I wasn’t to be defeated by the imminent national lockdown, I just managed to get this posy of flowers to my mum in time. Dahlias have been the stars of the cut flower garden this year. They have flowered non-stop since June. Pictured above is Dahlia Nuit d’Ete. It’s a semi-cactus type with long twisting, curling petals. Such a rich deep red. Flowers last ten days in a vase. The centre keeps opening out and the flowers curve back until they look a little like sea urchins.

Here are the dahlias tucked in amongst the last of the cosmos, salvia, scented white carnations, with grey senecio foliage and plum coloured Physocarpus Diabolo. 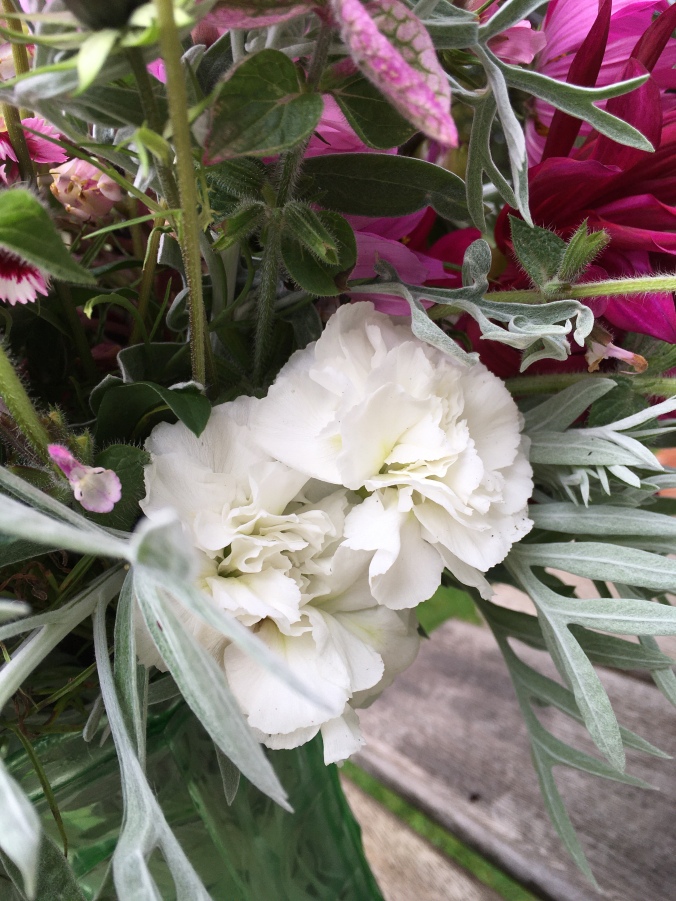 The carnation is Dianthus Bridal Star. Highly scented, but requires staking as it has a floppy- growing habit. I grow it in the greenhouse as rain spoils the flowers. Worth growing though for constant flowers from June to November. 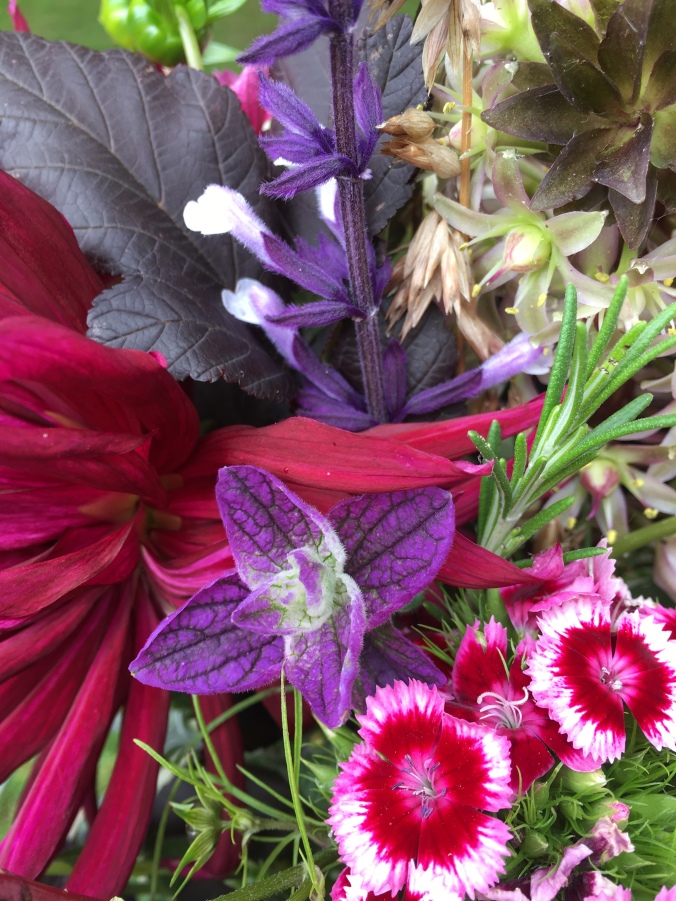 Salvia viridis blue, (centre of photo) an annual, sown in March and planted out end of May. I grow these at the base of the sweet pea A-frame which makes good ground cover.

There are also pink and white varieties of this annual salvia. Masses of flowers from a £2 packet of seed. Well worth growing.

A surprise discovery this summer was eucomis flower spikes. These got knocked over by the cat and puppy playing football….. I’m sure the cat thinks it’s a dog, as it joins in with all the ball games, and tries to come for a walk down the lane with us. We usually end up carrying him home. Anyway, Eucomis Sparkling Burgundy, known as the pineapple lily, lasts 4 weeks in a vase. They make wonderful centre pieces. I shall grow some specially for flower arranging next year.

Another surprise came from a row of sweet williams, planted out last month. They have decided to flower in November. I’ve cut the flowers for the house, and I’m hoping they will flower again next spring. They look good, strong plants, grown from seed in June. Perhaps the unusually mild autumn has confused them.

I found one last white dahlia flower, Eveline. This decorative dahlia has beautiful pink-tipped edges to the petals. 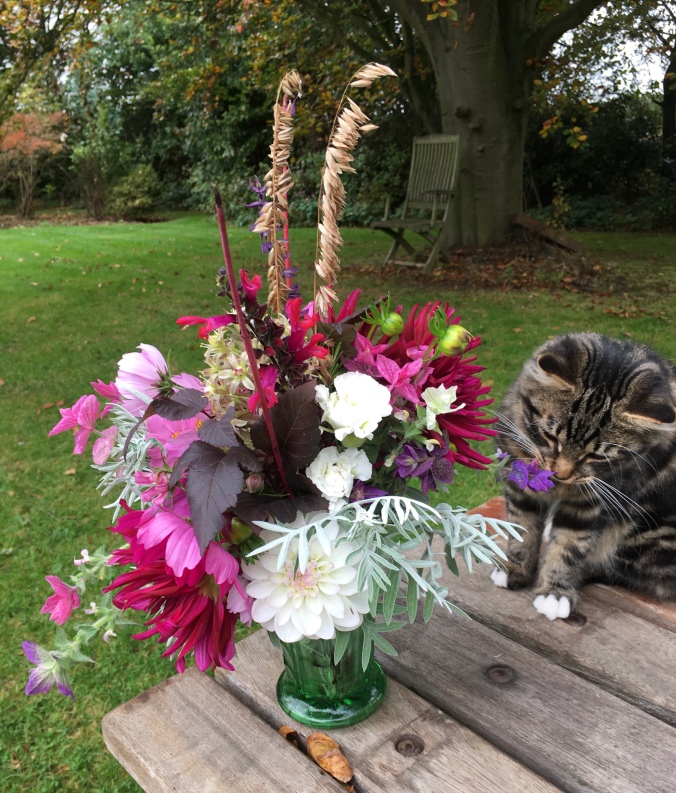 As with everything I do now, Monty likes to join in. He’s recovering from a small operation. As you can see, he’s doing really well and gaining weight nicely, after a troublesome start in life. Just look at those whiskers. And those chubby paws. You can tell he’s much loved. Adored in fact. He’s made such a difference and is helping to keep our spirits up during the pandemic.

I hope you’ve enjoyed this whistle-stop tour of my cut flower bouquet-making, even if it is a week late!

How are you all coping with the lockdown? I’m getting the veg plot ready for next year. It will be the first time I’ve managed to get all the jobs done by Christmas. Really, I’m not going anywhere at the moment.

Thanks for reading. Keep in touch.

Links : In A Vase on Monday with Cathy and everyone all around the world. See what everyone is growing and putting into their vases this week: https://ramblinginthegarden.wordpress.com/2020/11/09/in-a-vase-on-monday-7th-anniversary-still-life-with-pine-cone-rosehip-and-moss/