Rich Venetian shades. Just the joy we need for October days. Temperatures are dipping and nights drawing in, but the cut flower patch is blazing with colour.

Dahlia Nuit d’Ete is flowering well, standing up to the wind and the rain. We had the wettest September for 20 years. And October doesn’t look like it’s getting any drier. We’ve had 134mm of rain in ten days. That amount usually falls in two and a half months! With swamp-like conditions it’s impossible to work on the borders. Luckily my cut flower patch is divided by little slabbed paths, so I never need to step on the soil.

In amongst the dahlias there’s pink and red alstroemerias grown in pots. If you pull the flower stems out of the compost when you pick them, more blooms will follow. Pull instead of cut is the message. It seems destructive, but promotes further flowering. These are tall varieties suitable for cutting. I accidentally bought some dwarf types once, which looked pretty in the borders, but were hopeless for flower arranging. So take care when choosing plants. 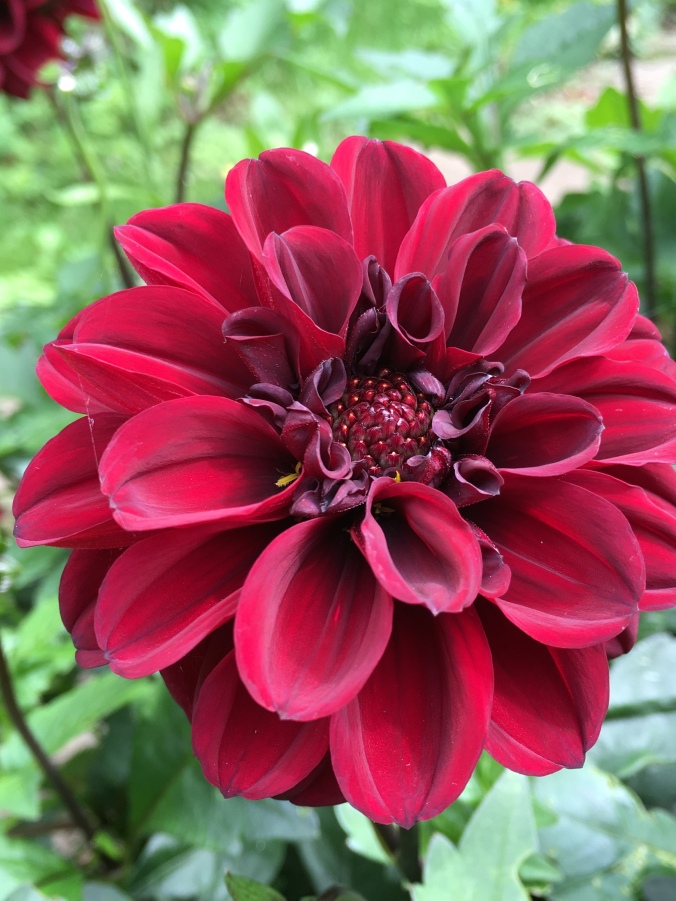 An old favourite I’ve grown for years. Very reliable and doesn’t seem troubled by rain and wind. Earwigs don’t seem to go for the darker shades, preferring the whites and pale-flowered dahlias. If your plants are being nibbled by earwigs, place upturned pots of straw or corrugated cardboard on canes near the flowers. In the morning you can tip the earwigs and their bedding into a wildlife corner, or amongst fruit trees. Earwigs are voracious predators of aphids and vine weevils. Worth relocating away from your dahlias.

Love lies bleeding. An easy to grow annual. Produces pendant tassel-like flowers. It’s also known as velvet flower, foxtail and prince’s feather. Sow seeds in half seed trays in March/April. Prick out seedlings into 9cm pots or full seed trays and plant out after frosts. Flowers all summer until the end of October and sometimes into November, depending on temperatures. 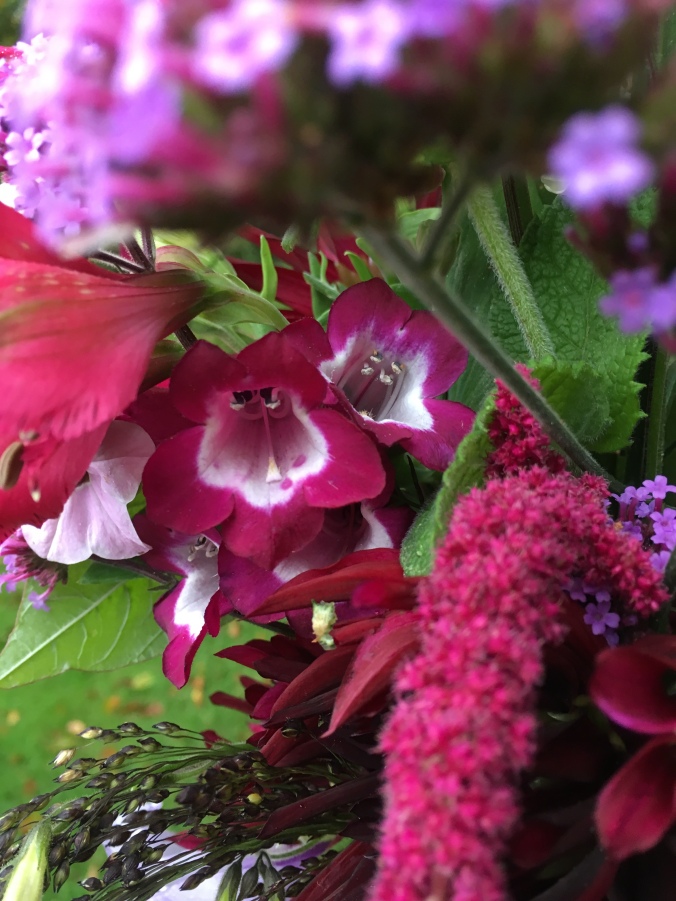 A short-lived perennial. This came as a cutting from a friend. It’s a good idea to take insurance-policy cuttings in late summer. These plants are not totally hardy. It’s the winter wet that defeats them, so plant in well drained soil in full sun and protect from the worst of the weather with fleece. Take cuttings in July and August from non-flowering shoots. Cut below a pair of leaves, where there’s a concentration of hormones to promote rooting. Remove all but the top two leaves. Place the cuttings around the edges of a 9cm pot filled with 50/ 50 horticultural grit and compost. The edges of the pot provide the most free draining position for the cuttings, which helps roots to form.

Another short-lived perennial requiring a sunny spot in well-drained soil. I lost all my plants in the Beast for the East big freeze last year. Luckily, it grows really well from seed and cuttings. Sow seed in the spring in half trays and prick out, as above. Or take cuttings in late summer. There are tiny side shoots just above a pair of leaves. Gently pull these down and you will have a short cutting. 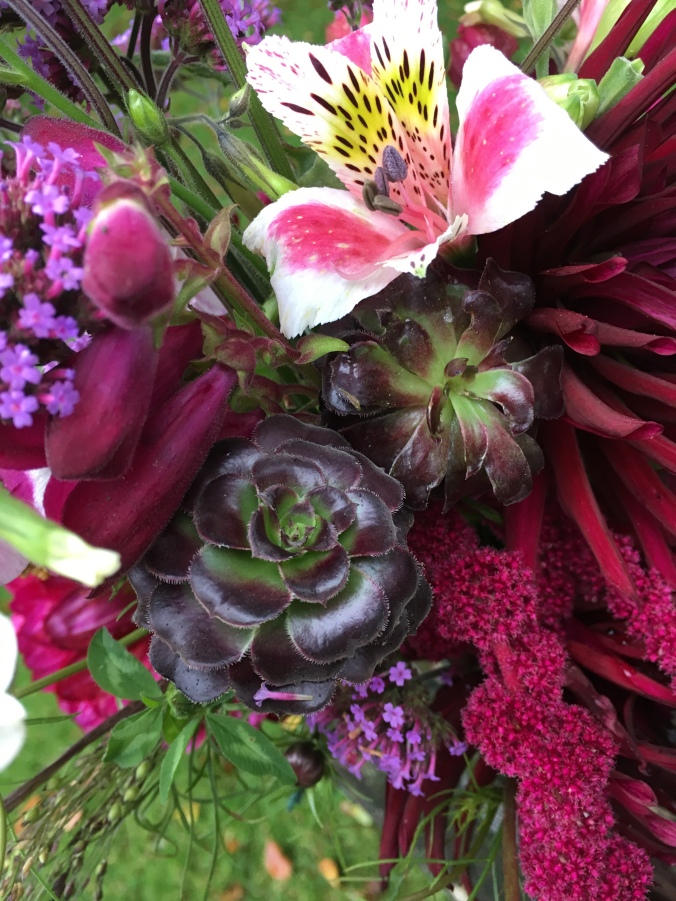 Aeoniums are evergreen succulents with a shrubby growth habit. My plants collapsed in the wind and some of the stems broke off. They make a lovely, unusual addition to flower arrangements. It’s all about using what you’ve got in the garden. When I take the posy apart, I’ll cut the bottom few inches from the stems and stick them in a pot of very gritty compost. Kept frost free, the cuttings will readily root and I’ll have new plants to stand out on the patio next summer.

The lovely pink rounded flower on the left is just common clover. This year I grew a patch of wild flower meadow in a raised windowbox on legs. I’m always saying you don’t need acres of land to grow food, flowers, and veg. So I put it to the test. It worked a treat. I filled the containers with Dalefoot seed compost and sowed seeds direct in spring. Red clover flowered all summer, alongside blue harebells, yellow birds foot trefoil, scabious, corncockle, and vipers bugloss. It’s been a joy to watch bees, hoverflies and butterflies visiting my little patch of “meadow.”

The pretty tubular flowers are colour-changing tobacco plants. These were sown and planted last year. They self-sowed over the winter, and have come up stronger and more beautiful this summer. I’m hoping they will do the same for next year, but I’ve saved seed and sown some more, just in case. Stems grow to 1.5m and produce clouds of trumpet-like flowers. They change colour as they age through various shades of white, pink and lilac. Glorious, and highly recommended. I’ll never be without it now I’ve seen it flower all summer long.

I hope you’ve enjoyed my Venetian shades bouquet, photographed on a windswept day in the garden. Golden beech tree leaves were swirling past my head as I was tying up the flowers. It seems autumn is on a fast forward setting. What is it like in your garden right now?

Links: I love to join in with Cathy’s In a Vase on Monday meme. But Mondays are my busiest working day. So I’m just going to post photos when I can. I’ll be reading all your posts when I get home from work.